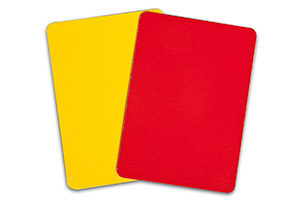 Last weekend’s Premier League fixture between Bournemouth and Southampton saw Bournemouth defender Adam Smith receive a controversial yellow card for simulation. Smith alleged that referee Jonathan Moss admitted he made a mistake and conceded he should in fact have awarded a penalty. Aside from the obvious implications that the decision may have had for the outcome of the game – which ended in a 1-1 draw – it means Smith has now picked-up five yellow cards and is consequently suspended from Bournemouth’s game against Crystal Palace at the weekend.

Surely, if the referee subsequently admits he made an error of judgement, at the very least Smith’s suspension could and should be annulled?

What can a player do if wrongly cautioned?

To consider this question, it fits to start by looking at the implications for a player dismissed for receiving a straight red card, the most severe punishment a referee can administer. It is unlikely to come as any surprise that the player affected may challenge his dismissal, or, to be more accurate, he “may seek to limit the disciplinary consequences of the dismissal […] by demonstrating to The Association that the dismissal was wrongful”, for which he must establish that the referee made an “obvious error” (FA Handbook 2017/18, Part 1(5)(a)).

In other words, strictly speaking, the referee’s decision itself is not subject to scrutiny so much as the justifiability of any consequences such as a suspension. Indeed, the rule goes on to say that it is expressly not designed to usurp the role of the referee, but rather to consider:

The rule also states “[a] claim of wrongful dismissal may be lodged only for on-field offences which result in a sending off, except for two cautions leading to a dismissal”. Notably, therefore, a dismissal resulting from two yellow cards, as opposed to a straight red, does not entitle a player to appeal against his one-match suspension. Nor can a player appeal a yellow card, even if it is his fifth of the season and means he is suspended in accordance with Part 1(8)(a), which states:

“A Player accumulating five cautions will be automatically suspended for one FTCM [first team competitive match] if he has accumulated those five cautions in (up to and including) the number of matches in the relevant League”.

In the case of the Premier League, the number is nineteen. Smith will thus be consigned to the stands to watch his side play Palace this weekend. To speak in the language of the rulebook, the “disciplinary consequences” of a yellow card are strictly not challengeable.

Perhaps rather perversely, it would seem to follow that Smith would have been better off had he received a straight red; of course, this is purely with reference to his prospects of playing in the team’s next game and putting aside the more obvious disadvantage that Bournemouth would have been reduced to ten men and might have gone on to lose the game. But imagine the incident had occurred in the dying moments of the game – in those circumstances, a red card would almost certainly have been preferable (although penalty points would still accrue, and may result in fines at the end of the season for the Club).

The state of the rules may seem still more perverse in light of the introduction earlier this year of a new offence of successful deception of a referee, which permits retrospective punishment for simulation. This was considered in more detail by Sports Shorts in May (see here), and last month saw the first case brought under the new offence (see here).

Controversial incidents arising from the rules on this area are infrequent, but not so much so that a change is unwarranted. Harry Redknapp has complained about the stance taken by the rules on yellow cards. Back in the year 2000, referee Graham Poll actually asked the FA to rescind a yellow card that he had awarded to Dietmar Hamann, although to no avail.

The rationale against yellow card appeals

The chief argument against introducing an appeals process for yellow card suspensions is that it would arguably make the system too bureaucratic. Officiating would take place “off-the-field” as much as it would on it. What is more, it might undermine and threaten the integrity of referees. For example, it could deter referees from disciplining players even when it would be entirely appropriate, which would threaten their duty to protect players and arguably defeat their very purpose. Although much less likely given the damage it would do to their reputations, in some cases it might conceivably cause referees to be too heavy-handed, that is, too disposed to going into their pocket, safe in the knowledge that if it turns out they have made a mistake, a suspension can be appealed. We all know the damage it can do to a game when a referee is unsparing in his use of cards.

Perhaps it is possible to reconcile these concerns with the frustration of players and managers affected by the status quo. One approach could be to permit a player to appeal only if a suspension attaches to a yellow card (whether because it is the player’s fifth of the season, or because he picked up two in one game). Of course, a situation in which yellow cards were appealed as a matter of course would not be acceptable, as it would invite precisely the kind of bureaucracy that the FA is trying to avoid. Frivolous or merely hopeful but unrealistic claims should strictly not be considered.

Some will see the rules on yellow cards as nonsensical, whilst others will instinctively identify with the rationale behind the FA’s stance, perhaps accepting refereeing mistakes and controversies as just another part of the game.

Bournemouth clearly cannot be put in the position it would have been had the referee got the decision right, which would of course be impossible. Change doesn’t look to be on the horizon, but you never know when an incident might bring the issue to the fore (imagine a title-deciding-match in which a critical player did not feature thanks to an erroneous yellow card…).