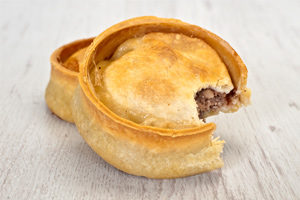 With Monday night’s fifth round FA Cup tie between Sutton United v Arsenal entering the 83rd minute, and with the non-league side trailing their Premier League opposition by two goals to nil following a spirited performance by the underdogs, a curious incident took place.

Much to the mirth and delight of TV commentators and social media users alike, Sutton’s substitute goalkeeper, Wayne Shaw (who also acted as the club’s goalkeeping coach and community liaison officer) arose from the home team’s bench and took a hefty bite from what appeared to be a pie. Whilst pies are synonymous with football and enjoyed by many a spectator whilst attending matches throughout the UK, sports nutritionists are extremely unlikely to recommend pastry-based goods as a source of fuel for players, all the more so during an actual game.

However, in the immediate aftermath of Shaw’s mid-game indulgence, most saw it as a harmless and humorous act by an extrovert who revelled in his moniker of the “Roly Poly Goalie”.

Fast-forward just 24 hours, Shaw had resigned from his position at the club, after the Football Association (“FA”) and the Gambling Commission confirmed that they were investigating the circumstances surrounding the incident.

This announcement, and Shaw’s subsequent resignation, followed his admission that he was aware of a betting operator offering odds of 8-1 on him personally eating a pie on camera during the game. Shaw stated that “I thought I would give them a bit of banter and let’s do it. All the subs were on and we were 2-0 down…I went and got it at half time from the kitchen, I had it all prepared and ready to go”. When asked whether he was aware if anyone had placed a bet, Shaw went on to note that “I think there were a few people. Obviously we are not allowed to bet. I think a few of the mates and a few of the fans. It was just a bit of banter for them”.

The betting operator involved subsequently tweeted that it had indeed paid out a “five-figure sum” in relation to the incident.

So, if Shaw did not personally place a bet – something he was keen to stress – why are the FA now investigating the matter?

Sports Shorts has previously considered the FA’s zero-tolerance rules on betting in English football in detail, which are set out in Rule E.8 of the FA’s Rules and Regulations (the “FA Rules”).

Rule E.8 makes it clear that a “Participant” (which is widely defined to encompass – amongst others – clubs, match officials, players, coaches, and employees of a club) are prohibited from:

Moreover, this prohibition applies to “any football match or competition sanctioned by UEFA, or FIFA, or by any other association, federation or governing body”, meaning that it operates as an international blanket ban on Participants placing, permitting, causing or enabling bets on football.

Does the incident contravene Rule E.8?

When bearing in mind the clear provisions in the FA Rules, Shaw would (prior to his resignation) have fallen squarely within the definition of a Participant, given in his multi-faceted role as player, coach and community liaison officer.

And, despite the fact that Shaw appears to have not personally placed a bet, his admission that he was well aware of the odds that were being offered could be regarded by the FA as contravening the blanket prohibition against “causing or enabling” any person to bet on “any other aspect of, or occurrence in, a football match” and/or the separate offence of promoting betting activity.

Whilst there could be an argument that, based on a narrow interpretation of Rule E.8, Shaw’s pie-eating antics could not be regarded as either an “aspect of, or occurrence in, a football match or competition” on the grounds that it did not affect anything that took place on the field of play or impact upon the eventual result, it is unlikely to be successful. An analogous situation is the ability for a referee to give a red card to a member of a team’s coaching staff. Despite that person not being physically present on the field of play, they are not regarded as operating in a “bubble” that is separate from the match itself and therefore immune from disciplinary action.

The rationale for the FA’s stringent approach is clear and understandable. The FA wishes to protect the integrity of football and guard against match fixing and corruption offences, a stance that was made clear during an education and awareness campaign launched in advance of the 2014-2015 football season and the intended message of which was unequivocal. Participants have a collective responsibility to uphold the integrity of football in England.

It seems that the Gambling Commission, which regulates the betting industry in Great Britain, has a similar view on Monday night’s events. When confirming its investigation into the incident, a representative of its enforcement and intelligence unit stated that “Integrity in sport is not a joke” and noted that, as part of its investigation, “it would be looking into any irregularity in the betting market”.

This is consistent with a warning that it circulated to betting operators in June 2016, in which the Gambling Commission expressed its concerns about “novelty” bets being placed on pre-recorded TV programmes such as the Great British Bake Off, which it felt was “harmful to the wider perception of gambling in Great Britain”.

Returning to football, some have claimed that the FA’s investigation, and Shaw’s subsequent resignation, is merely another example of football losing it “heart” and “sense of humour”. However, the FA Rules are clear on the issue of betting and are specifically designed to avoid Participants in football matches being involved, in any way, with betting on occurrences in football matches, whether related to the result of the game or not.

This zero tolerance approach also seeks to avoid any insidious acquiescence to betting on, what could politely be labelled as, “stunts” relating to, or in the immediate vicinity of, the actual game of football. However, if the FA wants to more clearly prohibit similar incidents or stunts taking place in the future, the wording of E.8 could potentially be widened in order to specifically include actions by Participants that take place in the build-up to, on the side lines during, and in the aftermath of, the match or competition to which it relates.

In this author’s view, it is difficult to see how orchestrated sideshows can be seen as part of the “heart” of the game or, indeed, the “magic” of the FA Cup. Instead both of those concepts were more than evident in the keenly-contested football game that was played out at Gander Green Lane, during which the non-league side held their own against illustrious opposition. Or in the now largely over-looked and sadly under-reported £50,000 donation by Arsenal towards Sutton United’s charitable work.

Following Shaw’s resignation, Sutton United’s manager, Paul Doswell lamented the fact that the furore surrounding the pie-eating incident had over-shadowed his team’s efforts and left him “devastated” for a colleague who has a “family to support”.

It is hard to disagree with those sentiments. However, “banter” is not a defence to the blanket prohibition in the FA Rules and the FA is right to ensure that the integrity of the game is protected.